The name of the city is related to its past, when it served as passage for tropeiros who touched the cattle through the fields of the mountain top in the end of century XIX. When they reached the top of the mountain, both tropeiros and immigrants found a small field of soft, green grass that served as a resting place and invigorated their strength. This lawn, according to some, was responsible for the baptism of the city.

The colonization is European, initiated by Portuguese immigrants in 1875, followed by the Germans, five years later and still by Italian immigrants, coming from Caxias do Sul, which borders on Gramado. At the same time that it developed the cultural traditions of the European descendants, the city also mixes the gauchismo aspects. Such diversity only makes the city even more enchanting, as the result of these mixtures can be found even today, in the varied cuisine and architecture of the municipality.

The natural beauties that form the mountain landscapes, with araucarias forests, birds and other wild animals, besides the characteristic fog of the mountain range, give a special air to this refuge. The Gramadense vocation for tourism was triggered precisely by its clean air and mild temperatures, not exceeding 30 degrees in summer and with occurrence of snow in winter. At this time of year, the frost creates unforgettable landscapes in the sights of the city. 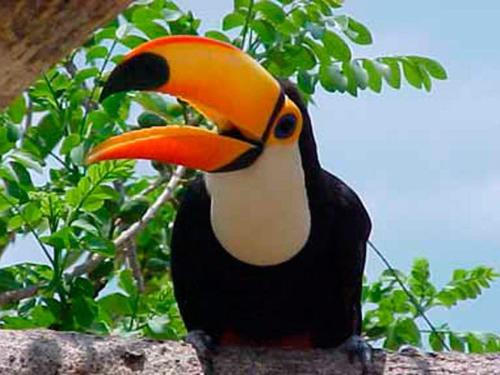 The new Gramado Zoo is the only park in Brazil classified as "category A" by the Brazilian Environment Institute (IBAMA). The classification means that this zoo has high environmental concern and no animal of the place has been taken out of nature. Part is bought in nurseries, authorized by IBAMA, and another portion is composed of animals seized by the institute in irregular captives. The zoo is in an area of ​​20 hectares, with a path of 1.2 km to be covered by visitors. There are almost 1,500 animals, including painted jaguars, anteaters, guará wolves, capybaras, howler monkeys, toucans, emas, bay lions, prey monkeys, orange sabiás, black neck swans and many others. The main highlight is the national collection - only animals of the Brazilian fauna, from all regions of the country. 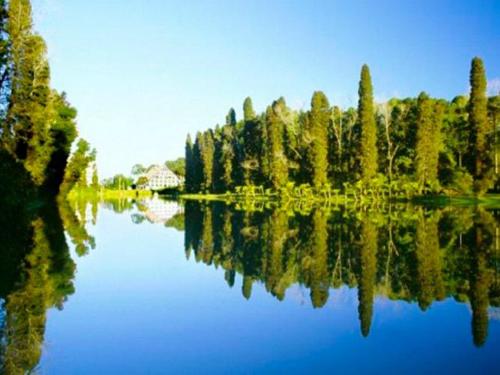 A short distance from the center of Gramado is one of the largest postcards in the city. It is the Black Lake Park with its lush nature the lake is one of the most sought after by visitors. The history of the lake reminds us of the beginning of the emancipation of Gramado. Built artificially in 1953 by Leopold Rosenfeldt, the Black Lake was named after him because most of the pines on his bank were brought from the Black Forest, a region located in southwestern Germany. 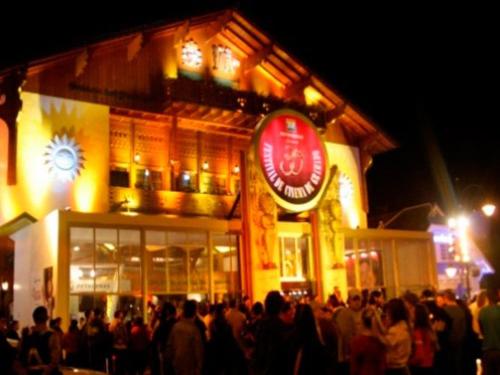 Light camera action. It is at the Palais des Festivals that the biggest event of Brazilian and Latin Cinema, the Gramado Film Festival, takes place every year. A beautiful and imposing building in front of Rua Coberta de Gramado. 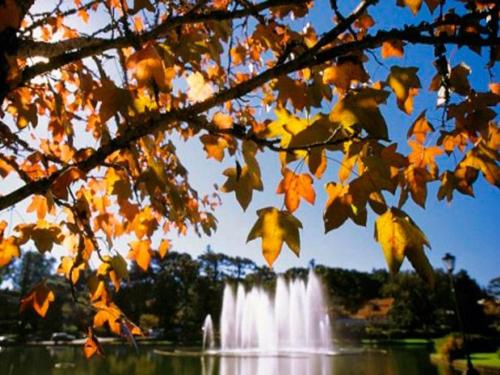 Idealized by Leopoldo Rosenfeldt, it has 17.000m2, in a space surrounded by many beauties. It was built by the ancestors with shovels and picks and has a small island in its interior. A walk along its banks is invigorating. In November and December the lake becomes the stage for the spectacle Nativitaten, a member of the Christmas Light. 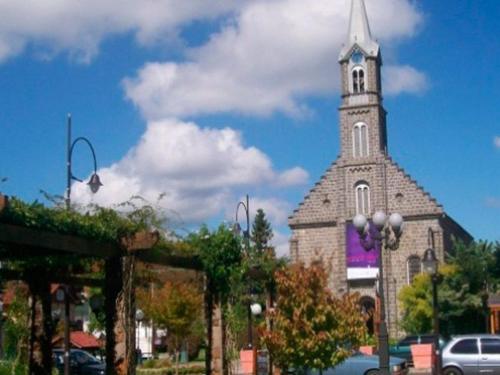 Opened in 1942, it is one of the largest demonstrations of religiousness in the community. The structure mounted on basalt stone displays art in stained glass with sacred images and in perfect architectural harmony. The tower, 46 m high, inspires a prayer to St. Peter, the patron saint. 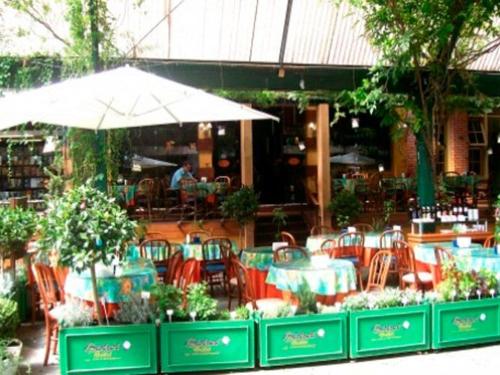 Rua Coberta is one of the most charming spots in Gramado. An all-year event scenario, Coberta Street connects Borges de Medeiros Avenue to Rua Garibaldi. The place is always busy with tourists and lots of beautiful people around. It has stores of chocolates, leather, confections, knitwear, sporting goods and bookstores. A bistro and several cafés complete the space that brings together great alternatives in shopping and gastronomy. It's a great mall in the heart of Gramado. 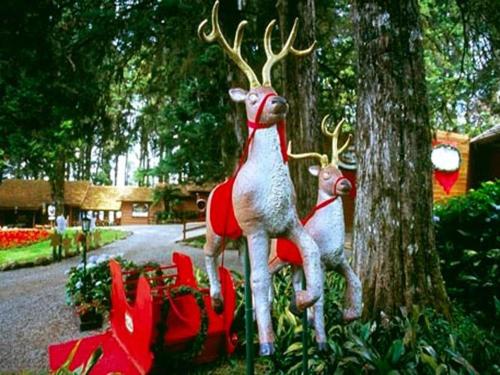 Located in Knorr Park, right in the center of Gramado, near the City Hall. One of the main sights of Gramado, full of charm and energy. So is Santa's Village. Santa's house, built in 1940, is the first house in the Bavarian style known as the Knorr Mansion. Now you can meet the real Santa reindeer. These beautiful exotic animals were imported from northern Europe and weigh between 150kg and 300kg. The Toy Factory, with 700m² of charm and magic, is where Santa Claus and his helpers make toys all year round. In the cottage of the bears, the friends of Santa Claus are welcomed, bears in movement offer more charm to the place. The Snowy Plaza, with artificial snow, makes up the attractions of the park with a beautiful scenery for photos. It operates daily from 13:30 to 19:00.

Viewpoint of the Quilombo Valley (Belvedere) 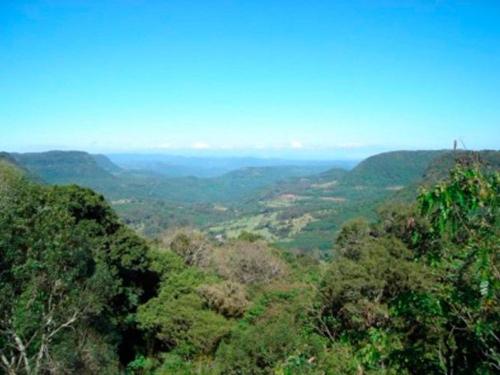 Belvedere is an Italian term that refers to any structure built for the purpose of enjoying the view. This viewpoint of the Quilombo Valley is an obligatory stop for those who love to contemplate beautiful landscapes. Open 24hrs. 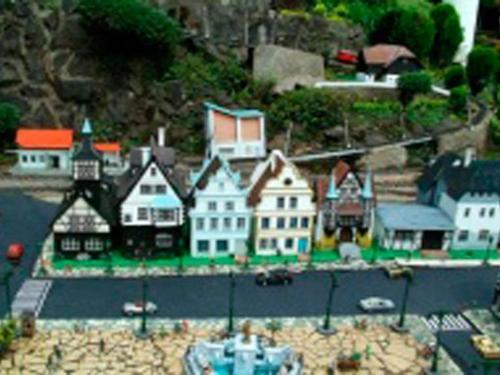 The Mini-World is, in fact, a small town with replicas of famous buildings all over the world, mainly in Europe. There are almost 50 replicas of castles, railroads, mills, squares, shipyards, waterfalls and typical houses. An important piece of information: these miniatures were built on the basis of the original designs, in the proportion of 24 x 1. The tower of Neuschwanstein Castle, with 2.40 meters in height, is the tallest building. Among the famous buildings that have their replicas in the Mini-World stands the Holstentor Lübeck, Lichtenstein Castle, Michelstadt City Hall, Stuttgart Berg Church, Römerberg-Ostzeile and the Lenzkirche station in Germany. The visit to the Mini-World is guided by the Chimney Sweeper, with clothes Hamburg Chimney Sweepers Union. Hours of operation, every day from 13:00 to 17:00. 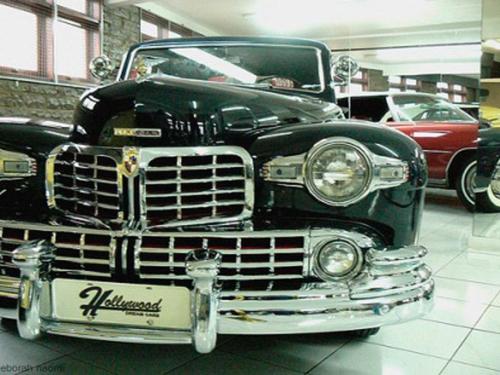 The Hollywood Dream Cars Museum displays the most beautiful and original automobiles of the golden years of Hollywood and the American auto industry of the 1920s, 30s, 40s, 50s and 60s. It is located at Avenida das Hortênsias, 4151. Estrada Gramado - Cinnamon. It operates every day from 09:00 to 18:00. 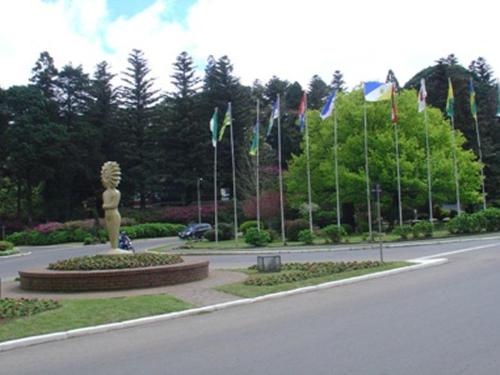 Located at the entrance to Gramado, the flags square pays homage to the Brazilian states. In this place there is also a replica of the "Kikito" maximum award of the Gramado Film Festival.